Our trusted field agent, George, was tasked with collecting an assessment for us for the purpose of summarizing the mission and accomplishments of the coffee venture thus far. Here are some excerpts from his report:

July 2013 remains to be fresh on the minds of coffee farmers in the Kolahun District area because that was the time in post war period we first heard of a market to be provided for our coffee crops. Gail and John broke the news that Compassion Corps was ready to buy our

coffee for a good price. This news was received in skepticism because for a very long time no one or no organization had told us such. At that time, many coffee farms had been abandoned or turned into either rice or cocoa farms.

Prior to the start of the Liberian civil war in 1989, coffee was the main source of financial income; children were sent to school, homes built, medical care, all from the proceeds from the sale of coffee. But after the war ended, we did not have anyone coming to buy coffee. People sometimes carried coffee to Guinea but were exploited and so everyone then abandoned the farms.

The good news from Compassion Corps made some farmers begin to work on their farms to prepare for the harvest period, although still doubting whether Compassion Corps would come to buy their crops. John, Emmanuel, and I continued to make follow ups with the farmers, keeping their hope alive.

The first year of buying coffee after the civil war coincided with the festive month of December, at which time all parents desire the best of everything for their families. Compassion Corps lived up to their promise and sent funds to begin buying our coffee crops. I wish everyone could have been here to see and feel the excitement from the farmers. Some farmers even forced their way to harvest coffee in the thick bush.

Enough of our coffee was bought by Compassion Corps. The process even provided some livelihood for many people-women were hired to clean and sort coffee; men were also hired to do weighing, sewing of coffee bags, packing of bags in the warehouse, and loading and unloading trucks.

OUTCOME OF FIRST YEAR OF BUYING

From my own assessment, following the intervention of Compassion Corps by providing a suitable market for coffee products, many parents were able to send their children to school the following school year. I heard a parent say, “If it were not for my coffee farm, there would be no way for my children to go school.” That brought joy to my heart!

In addition to school affairs, many farmers were seen cleaning their farms, while some were rehabilitating their old farms, and at the same time some farmers started replanting new farms (to cultivate the Liberica variety). 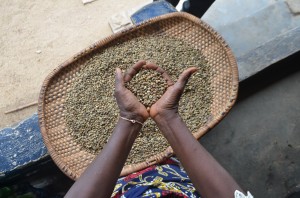 OUTCOME of SECOND YEAR OF BUYING

The second year of buying was widely interrupted by the just-ended Ebola epidemic. Notwithstanding, many farmers harvested plenty of coffee to sell to Compassion Corps, but it all started on a difficult note. When John came for us to start buying in December 2014, interacting with farmers (closely) was a difficult problem. There were lots of travel restrictions and health safety measures to follow… However, we managed to commence the buying. But the excitement and joy of the farmers was short lived when we announced that Compassion Corps was temporarily suspending buying due to shortage of funds to buy coffee.

Up to date, farmers are still calling and asking as to when we will move in to buy their coffee? Other buyers later moved in to buy coffee but because they are not offering a fair price, most of the farmers are holding fast to their coffee, expecting Compassion Corps to come and buy. 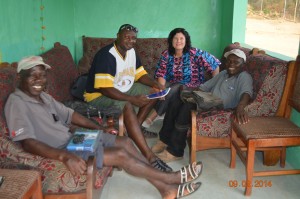 RECENT UPDATE: CEO, Jan Bean, is currently (Jan 2016) in Liberia, continuing to work on obtaining funding for the coffee enterprise and making connections to continue to facilitate a stable market in the now Ebola-free country.