Get to Know Our Staff: Chris Carr0

Get to know Christopher Carr! Check out the interview below and then read his entire bio on our site.

1. How did you first learn about Compassion Corps?

I learned about Compassion Corps through Jan’s son, Jesse. We were in
a Bible study together for eight years and we went to the same HS.

2. What made you want to get involved originally?

Jan and Craig asked me to create a brochure for their ministry. This was before Compassion Corps even existed and I was shocked and amazed at how much they, as ordinary people, had accomplished for the Lord and I wanted to be part of that.

3. What is your role on staff?

4. What has been your favorite aspect of/favorite memory during your experience working with Compassion Corps?

5. What is the hardest part about being a Compassion Corps volunteer?

The hardest part about being a volunteer…. is that I am just a volunteer. I really believe in my heart that there’s so much that could be done and so much that I would love to do for this organization. It’s just difficult to find the time to do it all to the extent that I want to.

I also find it difficult to process some of the tragic events that have happened to our partners over in Africa. The terrorist attack/wars in Timbuktu and having our partners’ children taken away from them in Morocco were both extremely crushing situations.

These are things that I expect will happen again in the future because we are working in some of the world’s hardest places, but it’s never easy to watch the people that you work beside get treated so unfairly. 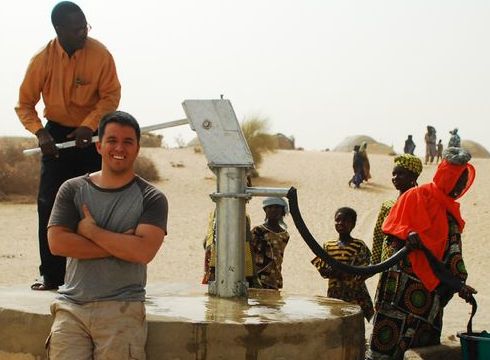 6. Which project/s do you feel particularly strongly about? Why?

I feel particularly committed to doing something about the water crisis in North Africa. I also feel strongly about my role in helping to establish Compassion Corps’ marketing vision and execution. I really believe that if we communicate effectively, people will be engaged and empowered and great things will happen.

7. If you could describe Compassion Corps in one word, what would it be?

8. What is one interesting fact about you?

9. Have you been overseas with Compassion Corps? To what country(ies)? What lasting memory do you have?

I’ve been overseas with Compassion Corps in the country of Mali and I
intend to go to Liberia 2014. I have a ton of lasting memories from Timbuktu, Mali – everything from visiting Elijah House and working hand-in-hand with the people there, to building wells.

I also remember standing in the middle of the Sahara desert and it was
so hot that my camera wouldn’t even work.

10. If there is one thing that you could say to others about why or how they might become involved, what would you say?

I would say that working for the poorest of the poor is never easy, it’s never convenient, it’s often quite hard, and that it is also probably the most satisfying thing you could ever do with your life. And I wouldn’t trade it for anything in the world.