Kids Helping Kids: The Story of 2 Schools That are Making an Impact0

Elementary kids know how to have a good time. They’re pros at getting messy during recess and telling silly knock-knock jokes. But before you get to thinking that life for the average elementary school student is all fun and games, let us tell you about two schools that are taking on one challenge quite seriously. 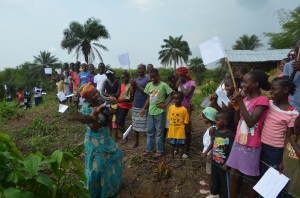 Martha and her kids celebrate the groundbreaking for phase one of their new home!

Compassion Corps recently launched a campaign to raise funds for a very special building project in Liberia. The new facility, which is currently in its first phase of construction, will be a home for nearly 70 orphans and their mother, Martha. When students from Jessica Cassano’s class in New Jersey and the students at The Christian Academy in Brookhaven heard about this need, they caught the vision and ran with it, proving that kids can make a difference too!

You can learn all about the story of Martha and her children by taking a few minutes to watch the video below. Then read on to learn about how these two schools are taking action! 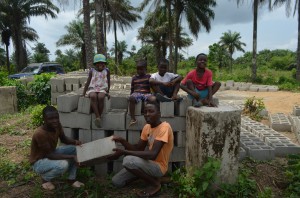 A few of Martha’s children at the building site with the bricks that have been donated.

When students from Jessica Cassano’s class watched the video about Martha and her kids, they decided to take action. They started bringing in their loose change to buy the bricks that would be necessary to start construction. Ms. Cassano designed a brick bank and the students took on the challenge to fill it! But they weren’t satisfied with just keeping the project contained to their classroom. They spoke with their principal and got permission to also bring their brick bank to the cafeteria so that other students could also get involved. The students knew that every 50 cents raised could buy a needed brick for the construction project. Within just a few short weeks, they had raised $500 – enough to purchase 1,000 bricks! What an amazing accomplishment, born out of the sincere care and willing spirits of kids excited about helping other kids.

At The Christian Academy, students are taking another approach to helping out. Rather than buying bricks, they’re raising funds to purchase livestock for Martha and her kids to keep on their property. Chickens and goats will provide milk, eggs and meat for the orphan children and allow them to have a sustainable source of food. Students at TCA are bringing in their spare change, but they are also being sponsored to run laps in gym class for the cause. Excited students pour into the gym each day, racing around the perimeter in hopes of squeezing in one extra lap…because they know that one extra dollar 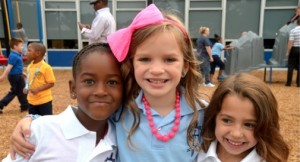 will go a long way. In fact, just $5 buys a chicken for Martha’s kids and the students have already raised enough to purchase several dozen! The students are having to run a bit harder to earn the $100 that is required to purchase a goat, but they’re off to a great start with enough money raised for two goats so far. Their excitement and effort is nothing short of extraordinary!

Compassion Corps is so proud of our small friends with big hearts. These kids are making an real impact in the lives of dozens of fellow elementary-age students across the ocean. The project may be simple, but the mission is so important.

A big THANK YOU to Ms. Cassano’s class and to TCA Elementary School for taking on the challenge to care for Martha and her kids in Liberia!