Lights…Camera…Action! Compassion Corps in the News0

October was a busy month for Compassion Corps! In addition to preparing and running the Orphan Day 5K and making final preparations to officially launch the Cup of Compassion coffee website, we were also blessed to host 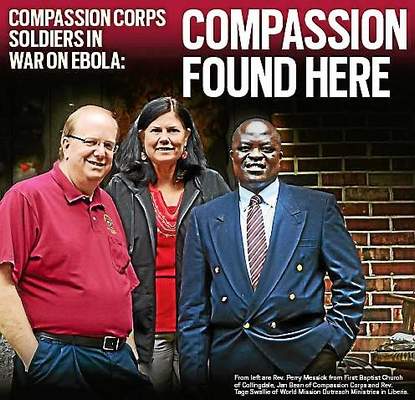 our dear friend and partner, Rev. Tage Swallie, while he was in the Philly area visiting for a few weeks.

As many of you know, Tage and his wife, Ruth, run Healthline clinic in Monrovia, Liberia. Needless to say, the responsibility they have taken on to provide care for their surrounding community has risen to a whole new level with the spread of Ebola in that region.

During his stay here, Tage attracted the attention of local reporters and as a result, Compassion Corps was featured in NBC10 and Fox29’s evening news broadcasts. On their website, you can watch NBC’s story, which covers the Ebola crisis, Tage’s efforts to combat the spread of the killer virus in his home country, and the measures that Compassion Corps has taken to help him.

Compassion Corps was also featured as the front page story of the Sunday Daily Times on October 12th. That story, which includes a more comprehensive overview of Compassion Corps and interviews with Jan, Beth, Tage and also with Pastor Perry Messick (1st Baptist of Collingd 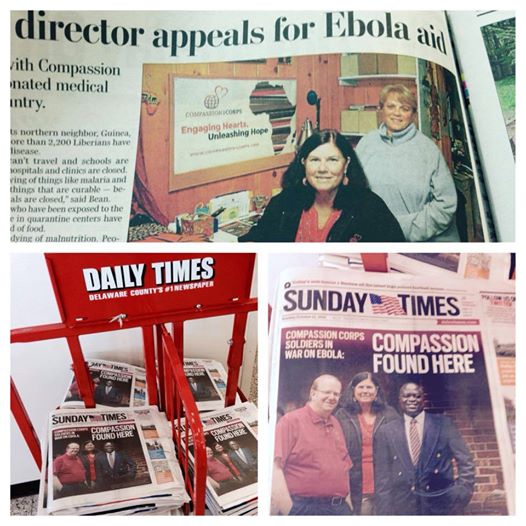 ale), was a real treat to find stacked by the hundreds in newspaper racks at local convenience stores that Sunday! You can read the online version of the article on the Daily Times website.

In a letter of gratitude to the Compassion Corps’ network, Pastor Tage says:

Dear Friends and Partners in the Lord’s Work,

I want to thank you for the kindness and warm hospitality that you all have shown to me during my time with you in the Philadelphia area. It was not only encouraging to me to meet so many people who are concerned for my country of Liberia, but in light of your generosity, we will soon be able to bless thousands there by means of the shipment of donated medical care supplies and food items…

…I have been able to reschedule my flight for November 27. I am eager to return home to Liberia, especially to my wife, Ruth, and to my family, church, and clinic. As soon as I am able to, I will send photos of the arrival of the container and the impact of the medical resources that God has provided.

With sincere thanks, from your friend and brother,