This post is from the journal of staff member, Lori Sheppard…

Halfway through this journey…in most ways, it still feels like I’ve just started. But as I meet new people and as they ask what I have done/where I am planning to go next, I am surprised at how much has already been accomplished and how much less I have to tick off on the itinerary.

This week has been one of lots of rest and joy. I have been able to stay with friends who are currently living in Fes. We were part of the same college ministry and it has been great to have time to reminisce and catch up on our lives since then. After the last two weeks of picking up and moving every 2-3 days, it has been nice to have a home base for a week…even one that is busy with 4 (of 5) kids! It has been fun to be along for birthdays and mountaintop cookouts (hot dogs and s’mores), shopping in the medina and just being here.

This past week, the people here celebrated one of their biggest holidays. I was invited to spend the day with the family of our team’s driver. This was a great privilege, and I was grateful that he thinks so much of our team/organization/me that he would want to make sure that I would get to share in their holiday. The day ended up being just like any holiday we have at home…think of Thanksgiving/Christmas/etc. The day consisted of breakfast together, traveling to visit family/friends, 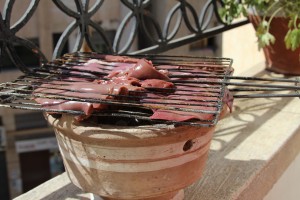 watching festivities or sports on the TV. It was lovely to meet family and be a part of their day. The big difference in the schedule of the day is the sacrifice. This is their biggest religious holiday and they celebrate it in order to remember the provision of a ram for sacrifice in place of the son of Abraham (Muslims believe in place of Ishmael, as opposed to Isaac as recorded in the Bible). The custom for this holiday with Muslims here is that each family sacrifices a ram. Every one. In their homes. (Did I mention that I am in a city???). Let me just say that there is a benefit to tile floors and drains everywhere….

I arrived at their home around 9:30am and was proudly shown the ram awaiting his fate…he was on the balcony of their 3rd floor apartment. The men cleaned off the balcony while breakfast was prepared. We had breakfast, and then watched some TV as the head of the household went looking for the men who would come and take care of the particulars, as he does not want to be the one (he is a big softie!) to do it. He also explained that most people do not know how to butcher a ram themselves. The 2 men arrived at the apartment and began their work. I will not go into detail here, but will be happy to give a play by play to anyone interested once I get back; I do have photos of the key parts. I will say that some of it was pretty interesting, but that is coming from a medical professional. I’ve done dissection of a brain…but I digress.

We had a lunch that is characteristic of this holiday: liver and heart kebabs. I will say, they were tasty. After lunch, it was time to go a-visiting, and that is what we did. My host and his family were most welcoming and hospitable. At the end of the day, when I was dropped off back at the home of my friends, he was very happy to have had the chance to let me share in their day, and I was glad to have obliged.

Taking it All In…

The most poignant part of the day for me actually came with the sacrifice. As I sat there watching TV and waiting for the men to arrive, there were the sounds from all around the city indicating what was happening. The rams were not really submitting willingly to their captors. But the ram in this home lay down quietly before his captors, and did not make a sound as they put the knife to his throat. It was a stark reminder for me of t

he obedience and submission with which Jesus went to the cross, as a sacrifice so that I may have the joy of heaven.

I am looking forward to heading back out to the countryside for a few days next week to visit some people that I met at the start of our team weeks. The rest of the time will be with some other friends, serving alongside of them and caring for some people right here in Fes.