The Journey of a Container0

There are companies that specialize in sending containers and it is a necessary part of their work.  But for Compassion Corps, the sending of our first container is a cause for celebration and remembering….

Back to the Beginning

Our story begins in 2010 when a large team traveled to Liberia.  While there, the team had the great privilege of meeting with President Ellen Johnson Sirleaf.  The President shared with the team that the education of Liberia’s children was of major importance to her.  So many had lost all of the years they should have been in school due to the country’s civil war.

As the group from First Baptist Church of Collingdale, PA, returned to their homes, the Burns family in particular decided to do something about this situation and so it began!  Pat Burns and others began to collect books and store them in a room at their church.  The room quickly began to fill up.

Then in 2011, another team had the opportunity to do some leadership training at a community college in Ganta, Liberia, along with continuing the teacher training that had started the year before.  The local college was beginning to build a library that would be useful both to the students and to the community.  Joe Watson, who worked at Neumann University and had taught some of the leadership courses at the college, took the book project to a new level.  Neumann was emptying their library and restocking it so there were hundreds of books that were available.   With a rented storage unit in Chester Heights and lots of manpower, Joe and his wife Sara began to head up a major undertaking to box up and label the college books as well as the books stored at the church and other donations of elementary books and high school curriculum.

Next was the process of obtaining and funding a container that would take over all of these boxes to the college and to Compassion Corps’ partners who all have schools that are in need of textbooks, novels, and other reading materials.  There were many options that were researched and pursued.  CC staff member, Chris Blidan, spent many hours doing her own investigation into this process and was able to give good advice based on what the professionals at Pilot Freight Services were able to tell her. With her help in research, organizing, and funding, the decision was finally made to work with a Liberian couple, Tracy and Emmitt Dahn, who send barrels and containers on a regular basis.  They were able to fill in the gaps and guide Chris and the rest of Compassion Corps team to seeing this become a reality.

In the meantime, after being in Liberia again in 2012, Compassion Corps wanted to try to also send over tools and sewing machines that could be used in vocational training.  The Senior Craftsmen of Media Presbyterian in conjunction with Chester-Jensen collected and crated all kinds of tools and people like Barbara Spry and Carol Proske donated gently used and rejuvenated sewing machines.

A Conclusion Worth Celebrating!

After over 2 years of planning, collecting, boxing up, crating, taping, and labeling, the day came to pack the container!  A team was assembled, a skid loader graciously operated by David Powell arrived, and at 9 am on March 9 the packing began.  There was a 4 hour time limit to get the entire 20 foot container packed so there were people on the container piling boxes to the ceiling and stuffing soccer cleats and soccer balls into every possible nook and cranny that could be found, while team members on the ground made sure every box was marked with its final destination, then set onto skids to be loaded.    People continued the work and at 1:09 in the afternoon the container was closed up and locked, ready for departure for the port in Newark.

The container is now sailing on the ocean and should arrive in Liberia to be received by our partners on April 11.  Thanks to everyone who played a part in this new and fascinating project. 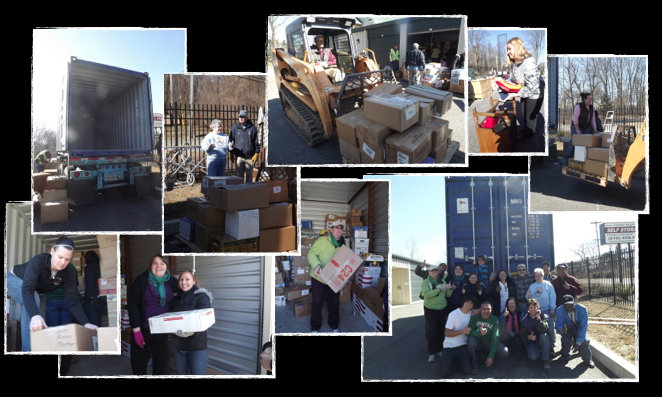