Thoughts from the Uganda Team0

In July and August, a 21 member team visited Compassion Corps’ partners in Uganda. The team spent a week in the northern town of Lira, a week in the western area of Kilembe Mines, and a few days in the town of Entebbe.

The trip was successful on many levels and we want to share some of the impactful stories with you from the perspective of those who went. Enjoy the following excerpts, which share the experiences and highlights of some of our team members:

One of the moments of this trip that has stuck with me happened on the third day in Kilembe Mines. After a few days of running a clinic there and also getting to know the children and the people, we were saying all of our goodbyes and also

leaving behind medicine for the community. A lot of things were done at Kilembe including Compassion Corps aiding the coffee business there. The director of the school, Lucy, was saying goodbye and she said “Who are we, as the people of Kilembe, to deserve this? Why us of all the people of Uganda?” It was so amazing and humbling to see that these people, who worked so hard for the little they have compared to us (in America), were so unbelievably grateful for the little that we gave them. They were so thankful for the love, the care and the time we gave to them even though in reality, there was only so much we could give them in the short time. It was so neat to see such beautiful and thankful hearts.

The first day we arrived in Lira was amazing for me. When we got there, the children were singing and there were a couple of ladies that were so happy to see us that they were jumping and screaming. Their hugs and kisses that they gave as 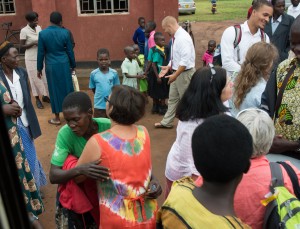 they greeted us were incredible. That church service was, what I would call, “poppin”!! We walked in and the people were singing “Hallelujah to the Living God” and dancing. I was so happy to be in church. I jumped and danced and sang all for the praise of God and it just felt great. After that, for the first time ever, I got a chance to minister and speak about the word of God in a classroom full of young children as well as to the middle aged kids after soccer drills. And this was

all just in the first couple of days. The progress that I made in my walk with God was awesome.

During one of our clinic days in Lira, several of us were planning to sneak out (the docs, nurses, and pharmacy people had it all under control) and go over to the secondary school across the road, behind the church to run a soccer (or futball) clinic for the kids there. The days prior to that, we had been spending the afternoons playing games and doing Bible lessons with the elementary kids right there at the church school, but on this particular day, we really wanted to get over to the older kids and be able to share an afternoon with them as well. 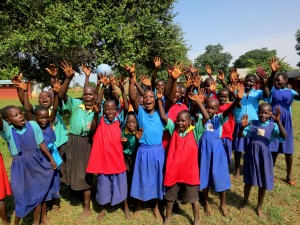 We had all our well intentioned plans – we knew about how many students we’d be working with, so we split up our team into different stations so we could each run one drill and we’d have the kids rotate around, so everyone would get to participate in each drill one time. The whole rotation required 5 of us helping – check! We needed certain equipment for each station – check! The process would take about an hour and half total and we had just that amount of time before our team’s van would be pulling out at the end of the day – check!

But…like many times in Uganda, our perfectly planned event was challenged and forced to morph into something different right on the spot. I guess we thought it would be so simple to walk right past the hundreds of elementary children we’d been playing for the past two days and expect them to stay put on their school grounds while we paraded bags of balls, pinnies, cones, and all sorts of fun looking soccer supplies right by them on our way to play with the big kids. Boy, were we wrong.

Their teachers even tried to help keep them on their own playground area while we made our way over, but soon enough, the flood gates broke loose and as we looked behind us, we saw that masses of beautiful bright eyes in matching school uniforms were marching along, excited to join in the fun. 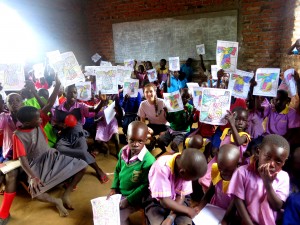 This organized soccer clinic for what we thought would be 100 high school kids (turned out there were more students there when we got there anyway) just turned into a massive “play day” for about 400 K-12th graders. Wow. Wasn’t prepared for that.

Thankfully, our team had brought several suitcase full of crafts and games, so we ran back for more supplies and somehow the 5 of us managed the mayhem (it was joyful mayhem, but mayhem none the less) without any major mental breakdowns from those of us with type A personalities and without any injuries to the hundreds of children running around in bare feet, looking like they were having the time of their lives. At one point, I looked up and just took in the scene – some groups of younger kids were throwing frisbees, chasing kickballs or jumping rope… others were gathered around one of our girls, coloring pictures or making yarn bracelets, and the older kids were loving their soccer drills, rotating whenever the barely audible whistle blew. 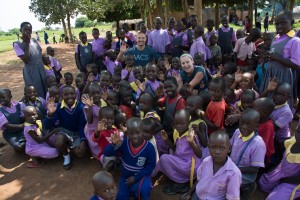 I was thankful for the experience, for our team’s flexibility and for the persistence of those little Ugandan cuties. They would not be denied. And why should they have stayed behind when that kind of wild fun was waiting just across the way?